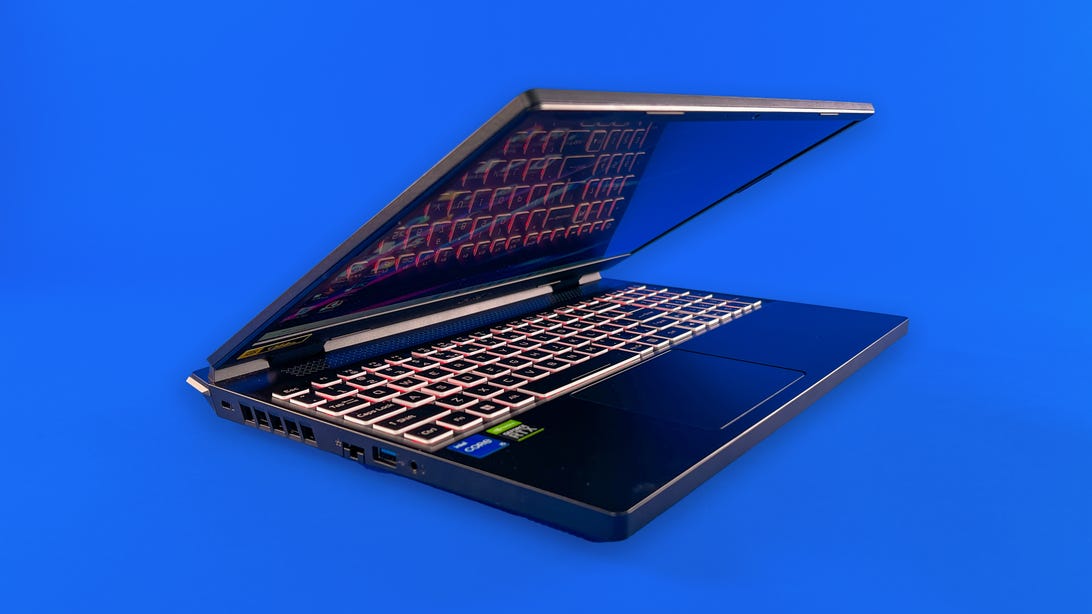 Everything is more expensive these days, that’s a given. With inflation, shipping congestion, chip shortages and whatever else is happening in the world, you can expect to pay more for things, including gaming laptops.

My idea of a budget gaming laptop used to be $1,000 or less. Right now, I’ve reassessed and around $1,200 seems like the right cutoff between budget and midrange. Acer’s Nitro line of gaming laptops used to start at around $800, but the least-expensive current model is $999, and with a 12th-gen Intel processor, the entry level price goes up to $1,049. The specific Acer Nitro 5 I’ve tested here is $1,299, which really pushes the limit of what you’d call a budget gaming laptop. But even at that price, it’s a good combination of specs and design, with 16GB of RAM, a 512GB SSD and an Nvidia 3060 GPU.

There are a lot of different Nitro 5 configurations floating around, and this one has an Intel 12th-gen Core i5-12500H CPU. The least-expensive model in the current lineup is $999 and has an 11th-gen Core i5 and an Nvidia 3050 GPU, but the same 16GB RAM’512GB storage, so I wouldn’t exclude it from your consideration.

The display is a standard 15.6-inch 1,920×1,090 one, but with a decent 144Hz refresh rate (reflecting the number of times per second the screen image can refresh) and a matte screen. That nonglossy top surface could be why the display felt muted, but I’m a fan of matte displays in general. I was slightly annoyed, however, that the “144Hz” sticker right below the screen was crooked. It shows a lack of quality control at some point in the manufacturing process.

In the thick of it

I’ve always liked the Nitro line because it works as a basic gaming laptop and as an everyday 15-inch productivity laptop. Acer makes more specialized gaming systems, like the Predator-branded Helios and Triton lines, but the Nitro leans more toward the mainstream side. I could compare it to Dells’ G-series mainstream gaming laptops versus the specialized Alienware Dell also offers.

I recently used this side by side with a Dell G15 featuring similar specs, and frankly it’s a bit of a tossup between them. The Dell has a more mainstream look and would fit into an office or airport lounge better. But I liked the chunkier, deeper keyboard keys on the Nitro 5 and its bold, bright backlighting that makes the keys stand out.

Still, it’s 5.1 pounds and just over 1 inch thick. I lugged it back and forth from the office to home several times, power brick included, and that was a pain.

It’s also got more USB-A ports than I’ve seen in a while (one on the left side, two on the right), but only one USB-C/Thunderbolt 4. That’s on the rear edge, along with an HDMI output and a port for the barrel connecter power cable. Gaming laptops are among the last laptops without a more universal USB-C-based power connection, because of the power needed to run the discrete GPU.

A surplus of software

I did notice a return of the excessive bloatware that used to be much more common in budget laptops: Dropbox, Planet9 (a gaming social media network), ExpressVPN and a few others have adware or offerware preloaded on the Nitro 5. Usually, PC makers earn money for including these links and apps. Are those savings passed on to you in the price of the system? It’s hard to say. The silver lining is that with a big 512GB SSD, it doesn’t eat a lot of storage space.

What I do like, however, is Acer’s Nitro Sense software for controlling the system’s gaming features. Unlike some other PC maker settings software on gaming laptops, it’s simple enough for casual users to understand and doesn’t clutter up the interface with more than basic fan speed controls, temperature monitoring, keyboard backlight settings and a few other things. While the fans could crank up sometimes, the system never got too hot, and it’s nice to have easy-to-access controls.

This is a mainstream-priced gaming laptop with a current-gen Core i5 CPU and an Nvidia 3060 GPU. That means you pretty much have a good idea of how it’s going to perform before even opening the box. In some tests, the system suffers compared to other Nvidia 3060 laptops we’ve tested by going with an i5 vs. an i7, but every game benchmark we ran (like Guardians of the Galaxy at high detail settings) was better than 60 frames per second.

I had been using the Valve Steam Deck as my main gaming PC recently, so it was a nice change of pace to switch back to a big screen and actual keyboard and mouse setup. New games, like my current guilty pleasure, Warhammer 40,000: Chaos Gate – Daemonhunters, ran great, and playing near a window made me especially appreciative of the glare-free matte screen.

But battery life was on the short side, at 4:37. Note: that’s just for streaming video, not even playing a game. Many of the gaming laptops we’ve tested recently, like the similar HP Victus, ran for longer. As a gaming laptop, that’s not a deal-breaker, but it keeps the Nitro 5 from being as useful a crossover productivity laptop as it could be.