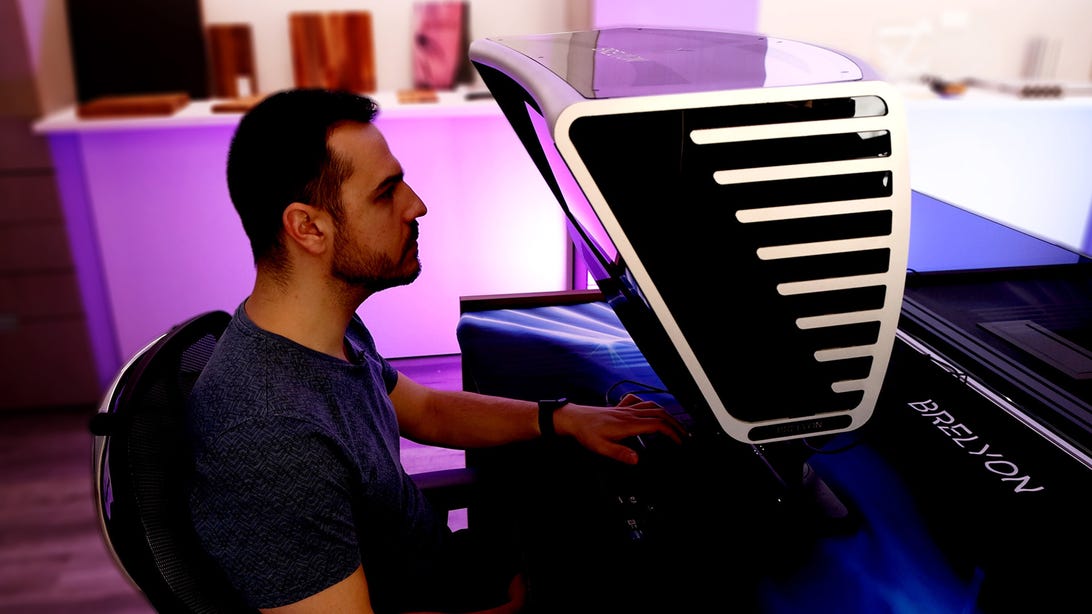 Metaverse-style immersion would seem to require dedicated VR or AR hardware to fully draw audiences in, but one company is offering an eyewear-free alternative. The Brelyon Ultra Reality monitor projects panoramic and cinema-scale virtual images with added depth. As you lean in to peer inside, you’ll see an image that appears to float 5 feet in the distance with a 101-degree field of view.

Brelyon believes its monitor could be used as an alternative to VR headsets like Meta (formerly Oculus) Quest. People could visit or work in the metaverse for longer periods of time without the discomfort of a headset. The company also says a projected screen of this size would eliminate the need to set up multiple monitors. The Ultra Reality display is already being used for industrial applications, such as teleoperation, control centers and trading floors.

The Ultra Reality display is also geared toward gaming, and prototype systems in the wild are currently being used for simulation training — such as flight simulators — as well as for simulation racing, arcade gaming and esports. Brelyon anticipates that one day you’ll walk into your local arcade and find these monitors attached to race-car rigs and more.

I had a chance to demo the Ultra Reality display in New York City. My video documents the experience hands-on.

The monitor I tried is a prototype: It had a 4K LG LCD screen with a 24×9 aspect ratio and a 60-hertz refresh rate. Brelyon has a partnership with LG to bring 5K OLED screens to future models, as well as a refresh rate of 144 hertz aimed toward gaming.

The display has added depth that in some cases can replicate virtual experiences. Brelyon’s CEO and co-founder Barmak Heshmat explained the technology behind it.

He went on to note: “These monocular depth layers require much more accurate crafting of light and are engineered to pan across multiple horopters. Because of this phenomenon, the brain fills in the gaps and gets a 3D sensation.”

That means, according to Heshmet, that “although technically the content is 2D and no re-rendering is needed, different parts of the image are set to be at slightly different monocular depths, which gives that pleasant sense of immersion — that feeling of looking through a window.”

There’s a panel within the top part of the enclosed setup that projects the image onto the surface facing you, somewhat similar to traditional rear projection. That’s a little different from autostereoscopic displays we’ve seen in the past — from the Nintendo 3DS and Lume Pad to the short-lived fad of laptops with glasses-free 3D screens.

My experience using it

Ahead of the demo, I asked if I could bring my personal computer to try some video editing or plug in a Nintendo Switch and play Mario Kart, but unfortunately the company was unable to accommodate my tech. Instead, I tried a couple of preset demos: a video with movie clips, video game recordings and scenic views.

When I sat down and peered through the monitor, I was surprised by how close my face needed to be to see the image. And what I saw wasn’t exactly what I expected. From Brelyon’s marketing videos, I thought I would be wowed by seeing a huge screen, but that wasn’t necessarily the case. While I felt fully surrounded by the projection, it didn’t feel any larger than an ultrawide monitor I’ve used before.

What surprised me the most was the projection’s depth. Trees in the foreground popped, and mountains in the distance looked much further away. Though this wasn’t the case for every image I saw, many moments did feel like 3D.

For the second demo, I played the racing game Forza Horizon 4, and this is when I felt the true power of the display. The game was almost as immersive as it is when wearing a VR headset. In order for me to view my speed, I had to physically move my head because it was displayed far in the right corner.

Limitations to an Ultra Reality monitor

While the monitor was exciting to use, there were some noticeable limitations.

There’s definitely a sweet spot for viewing through the monitor. If I moved too far back, the image was cropped along the bottom corners. I needed to scoot my seat close to the monitor and place my face inches away from the screen in order to get the full view. There also isn’t enough space there for more than one person to comfortably view the screen at the same time.

I also noticed a fair amount of glare coming from the windows behind me. If I were to use this on an everyday basis, I’d prefer to use it in a dark setting.

When Brelyon will be available

Brelyon’s first batch of monitors will be geared toward enterprise users and come out later this year. Those enterprise units might ship by the fourth quarter of 2022. Initially, there will be two models: the one I tried at 60 hertz and the other at 144 hertz, costing somewhere between $5,000 to $7,500.

The company says models for consumers are slated for 2024 and that these will cost closer to $1,500.

Though 2024 seems like forever in technology time, immersive experiences are only going to become more important as the metaverse market grows. With other companies like Apple working on VR headsets and Meta ramping up investments, we’ll likely see more innovations like this for entering the metaverse as time moves forward.

For more, see everything you need to know about the Metaverse and why it isn’t a destination (it’s a metaphor). You can also check out CNET’s list of best VR headsets for 2022.