Speaker 1: Lenovo may not be the first name you think of when it comes to PC gaming. But over the past several years, they’ve really built up a very nice business with the Legion line, which has really turned out a lot of decent, uh, gaming laptops and desktop and accessories. And all the new versions are here at CES 2022.

Speaker 1: So as it does most years, Lenovo has a new lineup of gaming laptops for CES this year, [00:00:30] the new ones that we’re seeing, there’s nothing particularly extraordinary or radically different about them, but they were nice year over year improvement on what we’ve seen before the flagship are gonna be the Legion five I pro and the Legion five pro. And even though they say five in the name, these are actually 16 inch laptops. And the difference is one of them has Intel processors. The other one has AMD processors, uh, and they both use Invideo graphics. Interestingly, these are 16 by 10 displays, [00:01:00] a little bit taller than the standard 16 by nine display that maybe you’re used to. And that gives you a little more height there. So I think the resolution works out to be 29, 60 by 1440. And these screens also get up to 240 Hertz in terms of refresh rate is actually adaptive, but that is much more in line with what you want for, let’s say eSports gaming, you know, just a real fast response that is kind of table stakes for a good gaming laptop right now, the displays also support Don vision and their Invidia ging [00:01:30] compatible.

Speaker 1: What I really like, and I’ve seen this in a few new gaming laptops so far, uh, for 2022 is that you can actually power these with a us BBC charger. It’s still a hefty charger, but instead of having one of those proprietary barrel connectors, you actually have just a standard USBC connection. And I think that’s a big step forward. Uh, for the first several years of USBC powered laptops. You really could not power gaming hardware with that, depending on how you configure these, you’re gonna be either getting a 12th gen Intel [00:02:00] CPU, a new AMD rise in CPU and video graphics, uh, somewhere in the 30 series, these two new laptops come in storm gray or glacier white or gray white as I would put it. And they’ve got some improved cooling, including a big copper heat sink, right under the CPU. So if you want something a little bit thinner and lighter, then a big 16 inch gaming laptop, well then you’ve got the Legion five eye and the Legion five, we got rid of the pro there.

Speaker 1: And that means this is a 15 inch screen instead of a 16 inch one. You still got 12 [00:02:30] gen Intel chips or new AMD rise chip. Although I think you top out and an Invidia RTX 30, 60 in those models. Now here’s something interesting in these, uh, new Legion five series, Lenovo says they’ve made the keyboard quieter, something like 30, something percent quieter. So if you’re typing or just banging heart of the keys, it’s gonna be a little less clacky. I can see that being, being disruptive if you’re playing a game and the keyboard is too loud. Sure. And of course I like that. These also support USBC charging, which I think something more gaming laptops are [00:03:00] definitely going to do moving forward. Now these are regular 16 by nine screens. So it’s 25, 60 by 1440. That’s the resolution. You’re gonna get another trick coming to the Lenovo Legion line.

Speaker 1: Uh, more software based than hardware based is something called Legion arena. And it’s something I see a lot of companies getting into, which is having their own proprietary gaming hub software that basically takes all of your games from different services, whether it’s steam, epic, go and putting ’em together in one easier [00:03:30] to handle sort of front end. Uh, Dell has a concept for this that they’ve shown off recently as part of a, a future gaming concept at piece they might do even, uh, God good, old games has their launch of that for a long time has actually pulled in games from other sources and let you launch them through there as well. I think with the fragmentation that you see in having so many different game stores and a different app for each one, even though you’re all basically playing the same PC games, I’d like the idea of having an all in one center. [00:04:00] Uh, even if it’s something that’s more proprietary, Lenovo, uh, than just kind of a generic thing. Everyone can use these gaming laptops from Lenovo are coming sooner rather than later, Lenovo says they’re gonna be available starting in February, 2022. Now the highest end models that Legion five pro the five and the five. I they’re gonna start at 1569 for the most tricked out versions and on the lower and the less expensive of these, the 15 inch, the five and the five, [00:04:30] I they’re gonna start at 1199 and 1129 for the AMD model. 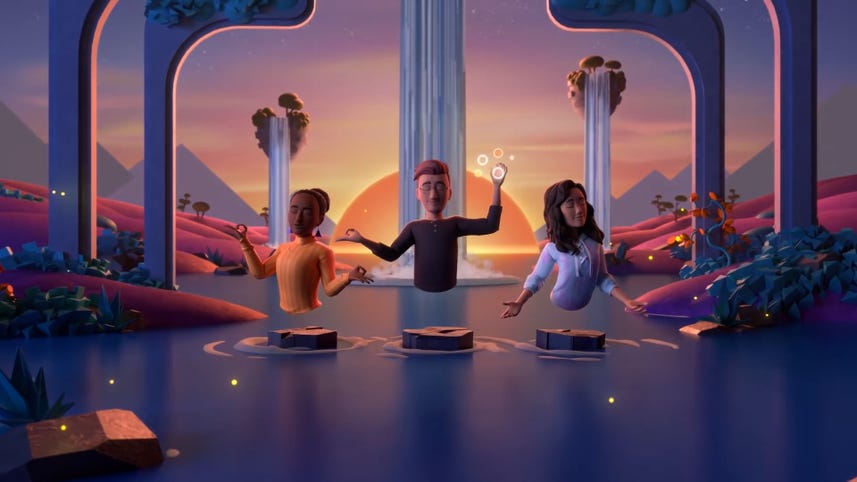 Web technologies
Meta Is Investing Billions to Build a Metaverse. But What Is It? – Video
Web technologies
Attention, iPad owners: Save up to $30 on an Apple Pencil right now