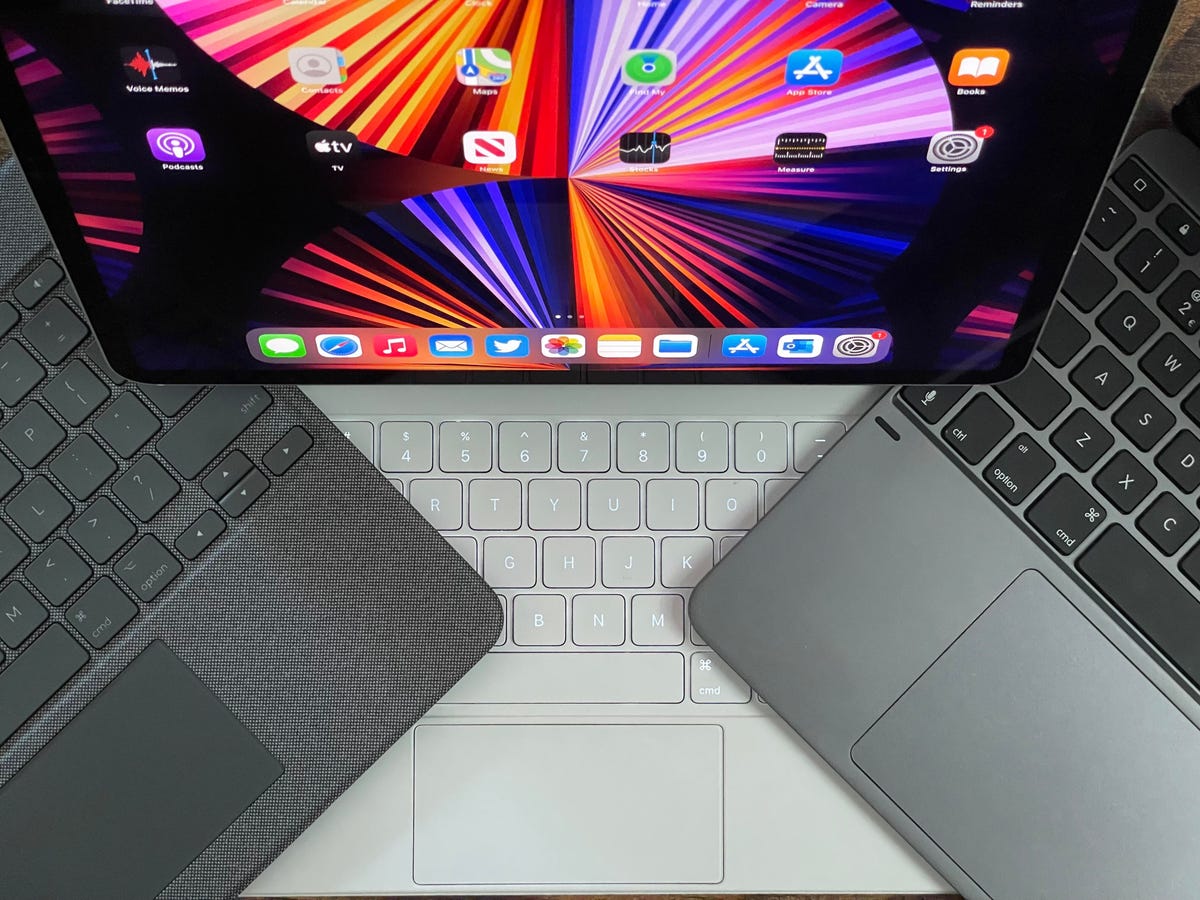 The 2021 iPad Pro has a new M1 processor, a new display (on the larger model) and optional 5G. But just like before, it doesn’t come with an iPad keyboard.

Keyboard cases for the iPad Pro add a lot to the picture, especially with a trackpad. Cases that have both a keyboard and a trackpad really feel like they help the iPad transform into a laptop. Granted, the OS is different. But Apple’s support for keyboard shortcuts and multitouch trackpad gestures work really well on iPadOS. In 2020, I compared options. Now, I’m doing the same.

Apple has its own fancy and expensive Magic Keyboard case. Two other manufacturers are also worth noting: Logitech makes a keyboard-detachable case with a kickstand that’s perfect for Zoom/FaceTime calls using that new zoom-in Center Stage camera, while Brydge has a new case with an extremely large trackpad and a design that feels closest to laptop-like.

They all have their advantages, and all work well, but I still prefer Apple’s Magic Keyboard for its size/performance over the others. I tested all of these on the 12.9-inch 2021 iPad Pro, which isn’t compatible with many older accessories because of its slightly thicker size. The smaller 11-inch Pro works with any 11-inch iPad Pro accessories going back to the 2018 model, and also cases for the 2020 iPad Air. Prices below are for the 12.9-inch keyboard version.

Apple’s keyboard, originally released last year, offers a comfortable typing experience. The keys, especially on the 12.9-inch, are well-spaced and feel just like typing on a MacBook. It hasn’t changed much since last year, but new 12.9-inch cases are sized up a tiny bit to fit the new Pro’s slightly thicker dimensions.

I’ve gotten really used to the design of this Magic Keyboard, and it’s well-sized to fit on smaller desks or on a lap in a pinch. But there are drawbacks. The adjustable-angle magnetic top cover doesn’t bend back as much as a normal laptop. The case’s rigid design also makes it nearly useless as a tablet case for sketching with a Pencil. The case doesn’t offer much protection, exposing the tablet sides and detaching easily on falls. There aren’t any dedicated function keys like the MacBook Air (and other iPad cases) have. The lack of volume/play/pause/screen brightness adjustments keys is a letdown.

The side USB-C passthrough is helpful because it adds an extra charge port while using the side Thunderbolt port for other dongles. The case runs off the iPad Pro’s power. It’s made of a soft material that can get scuffed up, and occasionally can get torn or dented depending on how you use it.

Cons: Needs to connect via Bluetooth.

Brydge’s latest premium keyboard case for the 12.9-inch iPad Pro, coming in mid-June, makes a big leap over previous Brydge keyboards. The redesigned bluetooth keyboard has more travel in its keys than Logitech’s or Apple’s keyboards (more like the 2015 MacBook Pro used to have way back). There’s also a tremendous multitouch trackpad that’s bigger than the one on the MacBook Air, which works very smoothly with multitouch gestures on iPadOS. But this iPad keyboard is also more expensive than existing Brydge accessories. Still, it costs $100 less than the Magic Keyboard.

A snap-on magnetic back cover gives a little more protection than older Brydge keyboards, and it’s also a lot easier to attach/remove the iPad, but that also means that the iPad can’t bend back at quite as wide an angle as before. Still, this is easily the most laptop-friendly iPad Pro keyboard case around, and really makes the whole thing feel shockingly like a MacBook Air.

The Bluetooth connectivity is easier and more instantaneous than before, but it’s not perfect. Sometimes I found the connection dropped out (as happens with Bluetooth), and sometimes, rarely, the trackpad gestures seemed a little skittish.

Pros: iPad case can be removed from the keyboard and used on its own with a kickstand. Comes with an extra row of function-based keys that the Magic Keyboard lacks. This iPad keyboard is more affordable than Apple or Brydge’s top-end new cases. Case offers solid protection.

Cons: Needs a lot of table space for the rear stand and keyboard base. Needs a stable flat surface to use (isn’t good for laps). Keyboard needs to be connected to case to use (runs off Smart Connector power).

Logitech’s latest iPad Pro keyboard case is a Pro-sized version of the company’s Combo Touch case available on smaller iPads. It works just as well: The detachable keyboard and trackpad are generous enough, although the trackpad is a lot smaller than the giant Brydge one. The extra row of function keys for volume, screen brightness, play/pause and other helpful shortcuts is really useful, much like it is on the Brydge keyboard. Apple’s Magic Keyboard lacks them.

I found the responsiveness of Logitech’s keyboard to be really good, but the design also means you’ll need to sit at a desk. Much like Microsoft’s Surface tablet keyboards, the bottom-connecting design won’t really work in a lap. The standalone case offers the best protection of any of these three: The rubberized sheath should help protect against bumps. The adjustable rear kickstand is helpful as a viewing stand for family Zooms, too. The more versatile design of the case means you can flip back (or remove) the keyboard for non-typing needs, like drawing with a Pencil or reading, without needing to pop it out of the case.