At first blush, Microsoft’s upcoming Windows 11 looks to be a solid update to the software that powers most of the world’s PCs. The first thing you’ll notice when looking at it is the new streamlined design similar to smartphones and tablets powered by Apple’s iOS and Google’s Android. Microsoft also added features meant to help people navigate the new ways we’ve all learned to work during the coronavirus pandemic. They include built-in video chat software, technology to make video games look better, and more-modern-looking buttons and windows for controlling apps and sorting documents.

But Microsoft believes its most important selling point may be what it doesn’t do. After announcing Windows 11 earlier this summer, Microsoft CEO Satya Nadella said his company is building its technology to work with as many products as possible, including software for competing Google Android-powered smartphones. Microsoft’s releasing Windows 11 as a free upgrade on Oct. 5.

Windows 11 review: New OS has us asking, update or wait?


“Today, the world needs a more open platform — one that allows apps to become platforms in their own right,” he said. “Windows is a platform where things that are bigger than Windows can be born.”

He pushed this point by inviting Google to bring its Google Play app store onto Windows. He also told developers they’re now allowed to sell programs on the Microsoft Store for little to no commission, a stark shift from Apple’s and Google’s 15% minimum take that’s led to an avalanche of court cases, antitrust probes and proposed new laws around the world. And Microsoft said it’d welcome Apple’s FaceTime and other technologies on Windows 11 and in the Microsoft Store.

“Windows is a driving force for innovation. It’s an enduring platform for each one of us to create,” Microsoft product chief Panos Panay said when announcing new Surface laptop and handheld devices last month. “And it’s home for billions to do their jobs, live their dreams, connect with the people they love. Windows 11 gives you a place that feels like home. It’s an area of calm, security, openness, and it’s designed to be centered around you.”

Microsoft’s move with Windows 11 marks the latest in a sea change for the world’s most highly valued software company. Two decades ago, Microsoft’s attempts to crush competitors through its Windows software led a federal judge to declare it a monopoly. Microsoft’s sharp-elbowed tactics and problem-prone software made it so reviled that people across the tech landscape shorthanded the company as M$ in chatrooms for what they saw as the company putting profit before the needs of people using its products.

Competitors joined in too. In the early 2000s, Google marketed its nascent search engine with the corporate ethos “Don’t be Evil.” And when Apple began formulating its “Get a Mac” campaign to help market its computers in 2005, it cast the Microsoft-powered PC as a bumbling and arrogant fool.

“The fact is you’re selling like hotcakes now, and I’ve got to get my message out, so I’m doing a little buzz marketing for good old PC, the only computer you’ll ever need,” said the character PC, played by comedian John Hodgman, who then holds up signs saying “Amazing!” and “Totally cool!”

But things have changed since then. Google dropped its famous “Don’t be evil” corporate mantra in 2015, opting instead for “Do the right thing.” (Perhaps not coincidentally, the search giant is now facing antitrust scrutiny itself.) And Apple’s controlling approach to the iPhone and its App Store have fueled lawsuits and government investigations in Europe and the US, fueled by complaints from major partners such as Tinder dating app maker IAC, music service Spotify and Fortnite developer Epic Games.

Read more: Windows 11: These are the best new features, and how to use them

Meanwhile, Nadella’s been instituting changes at Microsoft since he was named CEO in 2014. He’s pushed Microsoft to soften its approach with partners, competitors and even within its own divisions. It’s about “the renaissance as much as about just sort of fixing something that’s broken,” Nadella told CNET in 2018.

Now, with Windows 11, Microsoft sees an opportunity to stand out from the crowd, rather than merely compete.

“This is the first version of a new era of Windows.”

“Now is the time,” said Maribel Lopez, an analyst at Lopez Research. For a long time, Nadella has told developers that Microsoft is more open, easier to develop on and, with hundreds of millions of PCs sold every year, still a platform with opportunity. Even Microsoft’s biggest hurdle — the lack of a smartphone operating system — is fading as mobile chips begin to power more PCs and the lines blur further.

That’s not to say there’s an easy road ahead for Microsoft. Though the company is making its single operating system more accessible to developers, Apple boasts two popular platforms in iOS and MacOS.

“You can’t take Apple lightly,” Lopez said, noting that there’s a “war” going on for the future of tech.

In the 1990s, when people were buying their first desktops and logging onto the internet for the first time, Microsoft’s stated corporate mission was to put “a computer on every desk and in every home.” By 2015, it had largely succeeded — and that groundwork even helped put a computer in everyone’s pockets as well. (Despite Microsoft’s best efforts, though, the devices didn’t have a Windows logo on them).

So what do you do next? Nadella decided he wanted Microsoft to “empower every person and every organization on the planet to achieve more.” That thinking ended Microsoft’s obsession with Windows, solidifying it more as a company whose products help other company’s products run.

But the Microsoft of old didn’t entirely go away. Analysts believe Nadella’s broadsides against Apple during his Windows 11 launch speech weren’t just about knocking Microsoft’s biggest frenemy. His tone wasn’t jovial, nor was he dismissive like former CEO Steve Ballmer when Apple co-founder Steve Jobs first showed off the iPhone in 2007. Nadella was serious.

“He’s attempting to pierce the veil,” said Patrick Moorhead, an analyst at Moor Insights & Strategy, referring to Apple’s position as the innovative cool kid in the tech industry. “How many opportunities do you have to pierce the veil?”

Moorhead noted that Microsoft’s put a lot of effort into making sure its Office productivity apps, Teams chat software and other programs run well on iPhones, iPads and Macs. But Apple’s barely updated iTunes on Windows over the years, and it hasn’t even made apps like FaceTime available to download.

Microsoft declined to make Nadella available for an interview to discuss the motivations behind his speech. Whatever his reasons, Nadella’s move showed that beneath Microsoft’s cool-by-being-uncool veneer, it still has that monopoly-making cutthroat business sense.

“I can see why they envy Apple — everyone bows down to that company like it’s a religious talisman,” said Endpoint Technologies Associates analyst Roger Kay.

Read more: Windows 11: All the big differences from Windows 10

But attacking Apple may not be enough to change people’s perceptions. In 2001, more than nine out of every 10 computers on the planet was powered by Windows. Today, it’s closer to seven out of 10, according to StatCounter.

So Nadella may want to position Windows 11 as the anti-Apple, but Microsoft’s influence these days largely extends to the people who already have Windows. And those people will either download the free Windows 11 update when it’s released this fall or wait until the IT team at their company lets them.

“Microsoft’s only competing against themselves,” Kay said. “No one else cares.”

And if that isn’t enough, Microsoft’s building its Teams software into Windows in a way similar to how Apple’s used FaceTime with its devices. But it’s clear Microsoft wants to carve out its own identity with the way it’s opening up Windows.

“We’re building for the next decade and beyond,” Nadella said in that Windows 11 speech. “This is the first version of a new era of Windows.”

And maybe most important to him, it won’t be Apple. 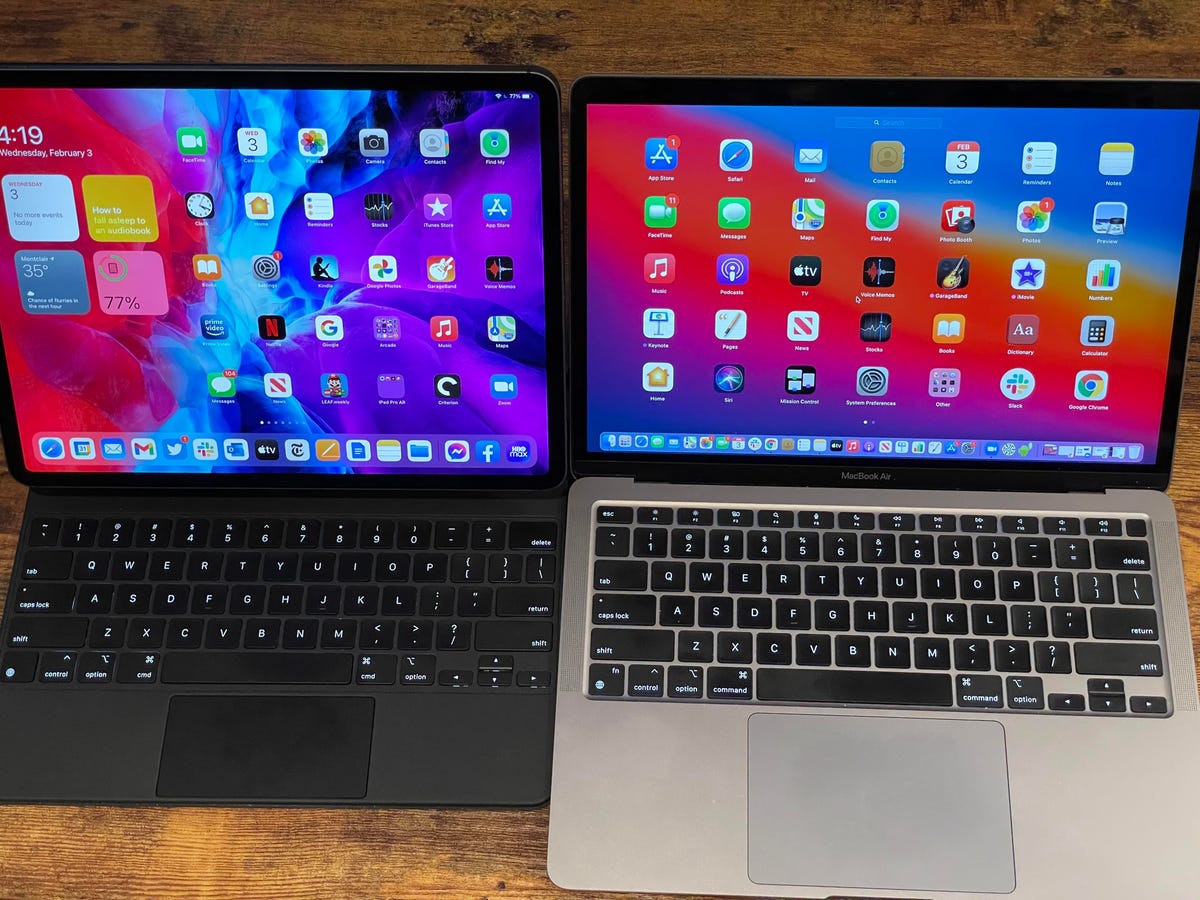