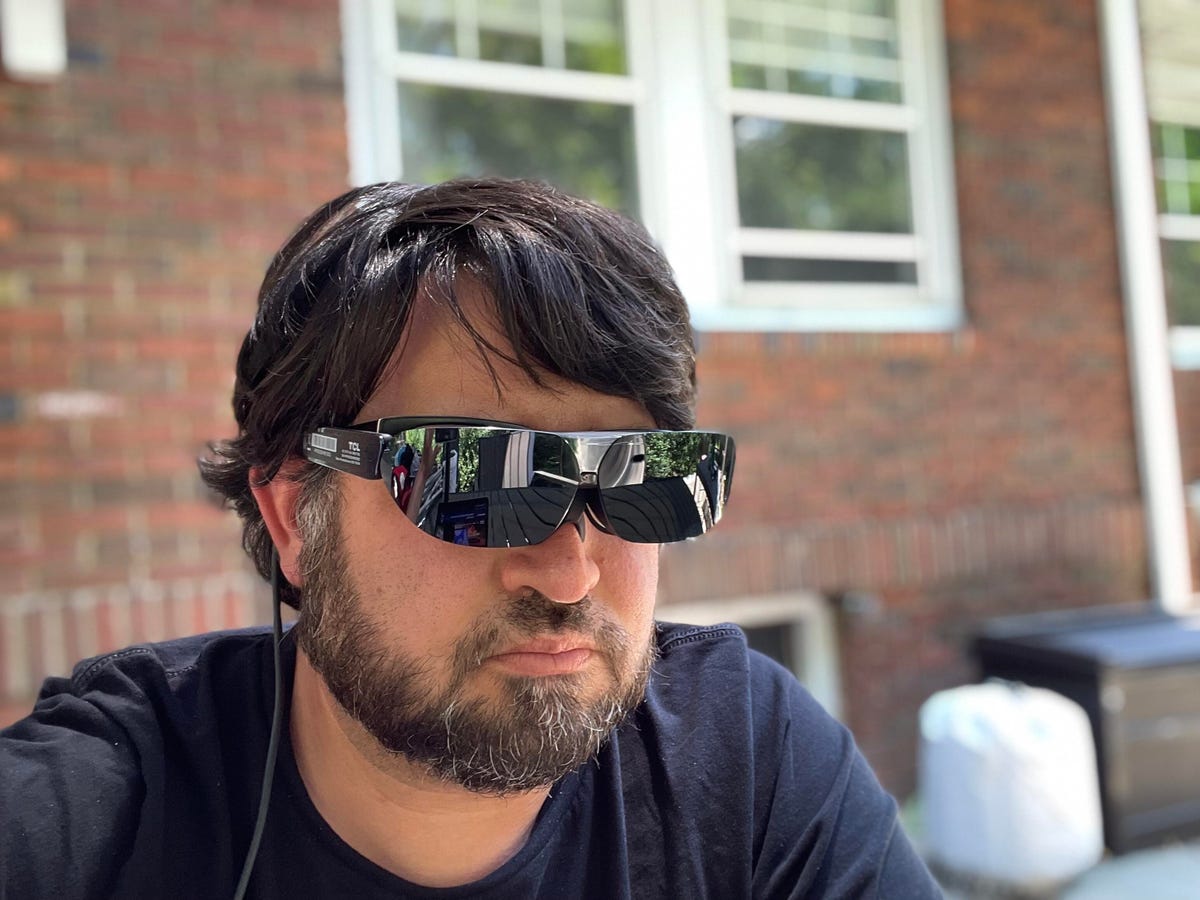 For the last week, I’ve been working on my computer with a pair of glasses, projecting the screen in front of my eyes, as my main monitor. Watching Netflix on my face while wandering around the house. Absurd? Transformative? A bit of both. TCL’s NXTWear G glasses have surprised me. In fact, I wrote this whole article using them.

I’ve worn VR headsets before, tons of them. AR headsets and smartglasses, too. Some have promised to double as monitors. Some, like the old Avengant Glyph, were specifically made to just be a wearable cinema display. But none were as good as TCL’s.

While I wouldn’t go out and buy TCL’s glasses (and they’re not available in the US yet), these experimental mirrorshades are evidence that lightweight wearable displays are a lot farther along than you think. But the missing pieces still need to be slotted in.

For instance: I wear thick glasses, and while these worked on top of my own, it wasn’t ideal. But the possibilities are still exciting.

I perched the glasses on my nose, layering my own glasses underneath. Four-eyes, double-specs. Cable snaking behind my right ear. I took the USB-C tip and plugged it into my M1 MacBook Air, and… success. A bright second monitor pops up in front of my eyes. I drag Chrome and Slack into it. I start responding to a co-worker by typing and looking into the glasses. Once in a while, I peek underneath them at the laptop display’s second screen, where email and other tabs are waiting.

TCL’s new wearable display-glasses aren’t VR, or AR. They’re just wearable screens. But, the display on these glasses is a lot better than I was expecting. While it doesn’t work with everything right now (in fact, very few things), the idea of these little plug-in glasses is interesting. If only the price were low enough, it fit more comfortably and it wasn’t so ultraspecialized. (TCL isn’t selling the NXTWear G in the US yet, but it’s AU$799 in Australia, which converts to about $590 or £430.)

TCL, a company that’s already known for its TVs, is dipping its toes into wearable immersive technology. And with a wave of possible lightweight AR glasses coming in the near future, TCL seems to be readying itself for a possible jump into the fray.

The NXTWear G glasses are compatible with DisplayPort Alternative-enabled USB-C/Thunderbolt devices, and that means not every Android phone or tablet will work (a TCL20 Pro 5G phone was included in my reviewer’s kit, because it has the necessary compatible port). This means, sadly, it didn’t work with the Nintendo Switch. Your mileage will certainly vary.

TCL’s reviewer’s guide lists a wide range of compatible devices. There are Android phones, including most of Samsung’s, going back to the Galaxy S8, plus many phones made by Asus, Razer, HTC, Sony, Razer, LG, Oppo, OnePlus and even the Blackberry Key 2. It’s also compatible with tons of Windows laptops, the Apple MacBook Air and Pro models, the iPad Pro (with USB-C/Thunderbolt ports) and Google Chromebooks (the Pixelbook, Pixel Slate and Pixelbook Go, plus models by HP, Acer and others).

TCL says the glasses feel like you’re using a 140-inch screen. From the distance they feel from my eyes while wearing them, compared to a monitor and TV on my desk, it can feel more like a 40-or even a 27-inch screen. Distances are relative with glasses on. But it definitely appears bigger than my 13-inch laptop. The 16:9 viewing area ends up being positioned in the lower part of the glasses, with a wide horizontal field of view but a narrower vertical one. (The diagonal field of view, according to TCL, is 47 degrees).

Seeing the whole screen sometimes required subtle adjustments on my nose. The 1,920×1,080-pixel resolution at 60Hz is plenty good enough for using a computer monitor, which is exactly what I did. Text was readable, even when small: the bright, crisp Sony OLED Microdisplay panels are a great demonstration of how good Micro OLED can be for wearable headsets. (Micro LED is already popping up in smart glasses.)

The three swappable nose tips should cover various faces: The one on the glasses in the box fit snugly over my thick glasses, the top rubberized edge pressing against my lenses a bit.

The frames are still thick, but approaching nearly normal-looking from the outside. At about 130 grams (4.6 ounces), they’re not that heavy, and the arms fold in like regular glasses. But the cable poking out of one arm, which you need to plug into your device (these aren’t wireless) gets in the way a lot.

Glasses as a second monitor

I didn’t know it would work with my MacBook Air until I tried on a whim: I was shocked it worked. But even then, the glasses would just play back video, not audio. And while the monitor resolution was bright, colorful and crisp for text and web browsing, videos played back on it were oddly murky and lower-resolution.

I used the glasses while writing this story. Right now, I’m looking at my Google Doc edits through the TCL display. The text is crisp, and the display area while wearing them is bigger-looking than my 13-inch laptop screen at normal seated distance. It just requires a different type of eye focus. How would that affect your eyes over time? Would you get fatigued wearing these? Almost certainly, I’d expect.

Works with an iPad Pro, too

I plugged into a 2020 iPad Pro and got what you’d expect: a mirrored view of the iPad screen. Apple doesn’t do much with USB-C/Thunderbolt monitor support on iPadOS, but videos can play in full-screen. I watched some of Lost Highway through the glasses, and it reminded me that sometimes the displays seem too bright. Black levels weren’t anywhere near as black, when connected to the iPad, as regular OLED phones or tablets.

For some reason the glasses didn’t work with the M1 iPad Pro, but maybe that’s because I installed iPadOS 15 beta. I don’t know.

A cinema display for a phone

When used as intended with TCL’s Android phone, the experience was a bit more interactive, but also less immediately functional. I’ll explain.

When plugged into a compatible TCL phone, custom software offers the option to directly mirror the phone, or show a specially laid out “PC-type” landscape-mode interface while the phone becomes a trackpad.

The effect is reminiscent of Samsung’s DeX dock with its phones, which outputs to a monitor while the phone also turns into a trackpad. Except in this case, the monitor’s on my face. Scrolling around to apps works, but some apps didn’t seem perfectly optimized to the size of the display’s desktop area. Apps like Netflix showed up in a small portrait-style layout at times, but videos when they played went to a full-screen mode (if you tap a tiny icon to switch to full-screen view).

Videos do look good. I watched Chef’s Table on Netflix, and some music videos on YouTube: Dua Lipa, The Weeknd. That’s the main purpose of TCL’s glasses: Playing movies and videos. But the audio on the glasses, which is piped through small holes in the thick arms, didn’t sound fantastic. It was serviceable but not stellar. You could always pop in headphones, though.

The glasses have swappable nose-tips, which perch the thick glasses up a bit on my nose. This helped me fit them over my glasses, so they worked well enough to actually function, although I’d want something that worked better. The Oculus Quest and Microsoft HoloLens, in comparison, are better designed to slide over glasses.

The Micro OLED display is so crisp. I started using the glasses with my laptop, and I kept using them. It’s more than good enough, and seems as good as what most VR displays feel like in a PC monitor mode. It might even be better.

The glasses also allow me to see the world around me with peripheral vision. I’ve got my hands on the keyboard below me, my stuff on my desk, my watch, my phone. It means I can wear these and still peek at the real world. I can even, weirdly, look at my laptop screen and this screen at the same time (albeit with different focal distances).

The weird stuff (besides being a monitor on my face)

TCL’s glasses are lightweight, relatively, but still thick in parts: the large glasses arms feel weird on top of my own glasses (not surprisingly), and the thick USB-C cable on one frame arm dangles weirdly behind my ear, catching my earlobe.

These glasses only project a single 2D display at a fixed distance, and it doesn’t “fix” to a point in space like VR headsets do. If I move my head, the display moves with me. I can see the rest of my office around the glasses, and the sometimes-shifting position of the floating display as I move my head can get disorienting.

For that same reason, looking at corners of the screen can get annoying. Instead of being able to shift my head or look closer-up at a monitor or screen, like I can do with any real-life display, the TCL glasses-displays remain glued to my face. To look in the corner, I need to angle my eyes up: moving my head does nothing. Leaning forward doesn’t bring the screen any closer either.

One last thing: These glasses can get warm on my face. The top of the frames started to feel quite toasty as I wore them for over an hour. Hmm.

This is what smartglasses could offer, eventually

I know, I know: Why wear a display on your face, Scott? Well, if it’s good enough and portable enough, and eventually comfortable and affordable enough, why not? If we are indeed heading toward a future of AR-enabled smartglasses in the next five years, having these glasses double as useful large-screen displays is a clear bonus benefit and possible middle step before we figure out how to live in a world of holographic overlays. TCL’s NXTWear G glasses aren’t aiming to be everything, but they’re surprisingly good at just delivering what they already are.