After years of swearing you didn’t need a printer at home, well, here you are. Now that everyone’s been officing-in-place for going on a year, sometimes you just need to print something out. But, based on my own history (and corroborated by many of my peers), the one thing almost every printer has in common is that sooner or later, you pretty much want to throw it out of a window. Usually sooner.

But there must be some ground rules for finding a good printer that is less aggravating to use than a health insurance website. I did a deep dive into features, prices and potential problems, and came up with some general guidelines about what to look for and what to avoid.

Some inkjet printers are so inexpensive, it’s almost like an impulse buy. But the you-get-what-you-pay for adage still applies. Everyone’s seen cheap printers where a set of replacement cartridges cost more than the printer itself.

Since I switched over to primarily using laser printers, my frustration level — at least about printers — has been significantly lower. I’ve never had to deal with ink cartridges that didn’t work, got stuck or only printed a few times before losing quality. Laser toner, even in color, tends to last a long time, and delivers more consistent results.

More importantly, because so many laser printers started life as pro-level office products before going mainstream, I’ve found them to be more reliable. Not perfectly reliable, mind you, but more.

Just think of a laser, either monochrome or color, as your default pick and you’ll be a lot happier in the long run. There are some versions called LED or digital printers as well. That’s basically just a slight variation on how laser printers work, so consider them the same thing.

If you want to know what I use, at the start of the pandemic, both my mother and I got new monochrome laser printers for our home offices, specifically the Brother HL-L2370DW. I’ve also had a very reliable color version for a few years, the latest model of that is the Brother HL-L3270CDW. Some other top printer picks can be found here.

But what about photos?

There’s always an exception. For all they do well, laser printers aren’t great with photos. Small pictures and illustrations in documents, sure. But Fotomat-quality prints on glossy paper? Yeah, you’ll need an inkjet for that. If you need pro-quality photo prints, consider a specialty photo inkjet printer. But note these can be more expensive to start with and have very high ongoing costs thanks to recommended specialty ink.

Do you really need a built-in scanner?

No. What is it you think you’re going to scan? Just take a picture with your phone and clean it up a bit in the phone’s photo app or a photo-editing app on your laptop. I’ve been doing this for everything up to and including very important legal and financial documents for years, and no one has ever complained.

If you need to scan in dozens of pages at a time, then you need a sheet-fed scanner, and reliable ones are usually only found on more expensive all-in-one multifunction printers or office printers.

I thought it was ridiculous when I saw a 3D printer manufacturer adding DRM to its machines, so it could only use one brand of filament material. It was equally ridiculous when HP (and others) tried to DRM their printers, stopping them from working with third-party ink. These restrictions were (rightfully) lifted after a public outcry, but it’s only a matter of time until someone tries it again.

Off-brand ink is the way to go, for both inkjet and laser printers. I’ve never purchased “official” toner for my laser printer, and it’s never been an issue. A full set of black and color toner from Brother is currently $176 on Amazon, while a no-name toner set is under $40. Read some Amazon user reviews if you’re worried, but it’s fine, get the cheap toner.

Consider spending more to get a decent onboard touchscreen. It may not seem like something you’d use regularly, but when setting up a new printer, you’ll want the ability to punch in your Wi-Fi password without scrolling through every letter of the alphabet.

Also make sure to look for a manual feed slot — it’s common, but some low-end printers may skip it. That’s important for using a single sheet of glossy paper, card stock, mailing labels or anything else without having to open the main paper tray and swap paper. 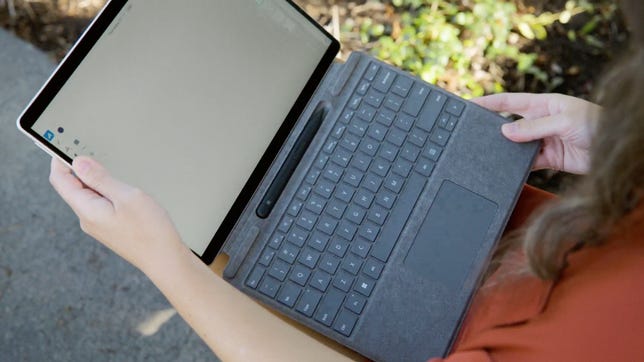