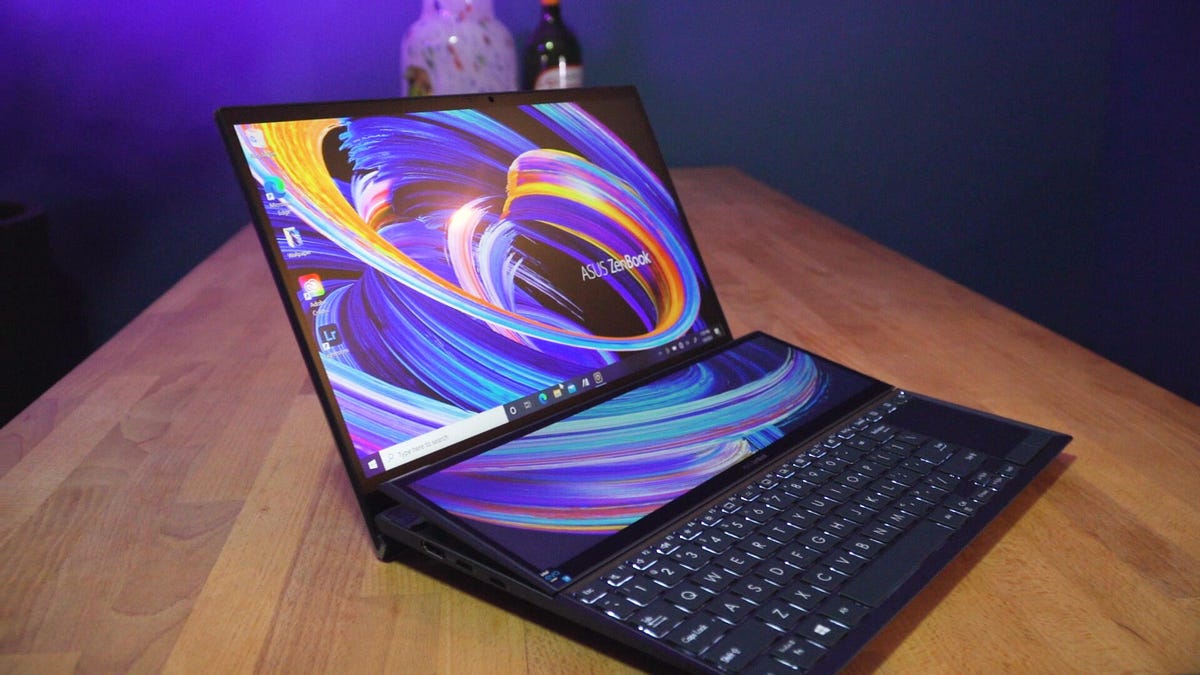 Most PC makers show up for CES with a concept device or two. Asus, on the other hand, arrives with laptops that are beyond what others are doing — and they’re ready to ship. The ZenBook Duo is a perfect example. The dual-screen laptop is in its second generation and it’s been redesigned to be smaller, lighter, run cooler and have faster performance with new Nvidia GPUs and 11th-gen Intel processors.

Asus used a new hinge design that tilts the secondary displays, called ScreenPad Plus, up to 9.5 degrees on the Duo Pro 15 and 7 degrees on the Duo 14 when you lift the lid. This gives you a better viewing angle but also increases airflow and makes the gap between the displays seem smaller, so it’s more like one big display than before.

Windows recognizes the ScreenPad Plus as a second display, so you can use it for whatever you would use a second screen for. But Asus also has a bunch of utilities for the ScreenPad available through an onscreen touch bar. You can, for example, launch a number pad or turn it into a giant touchpad. You can also write on it with the included active pen if you need to jot down a quick note or sign a document.

There’s also a new Control Panel app with a customizable dial, a slider and button decks for Adobe Creative Cloud apps. It’s sort of like a supersized Touch Bar on a MacBook Pro, but with greater flexibility and simply more room for your tools.

The ScreenPad Plus’ panels are brighter than the last-gen models at 400 nits, so they’re easier to see with reduced glare and reflections. Asus also includes a folding stand, which attaches to the bottom of the laptop and angles the body up to make it more comfortable to use the bundled pen on the ScreenPad.

The Asus ZenBook Pro Duo 15 OLED is expected to be available in North America starting in April; no pricing was announced. The Duo 14 is available for preorder from Asus starting at $1,000.

Along with the Duo 15 and 14, Asus announced the ZenBook 13 OLED, Zenbook 14 and ZenBook Flip 15. The Flip 15 is available now starting at $1,150 and is “one of the world’s most compact 15.6-inch convertible laptops,” Asus says. The ZenBook 14 is an ultrathin AMD-powered laptop with a Ryzen 7 5800H processor and an option for Nvidia MX450 graphics. The ZenBook 13 OLED is a 2.5-pound clamshell with a 13.3-inch FHD OLED display and various AMD Ryzen mobile processors. No pricing was available for them and they are expected to be available in February.